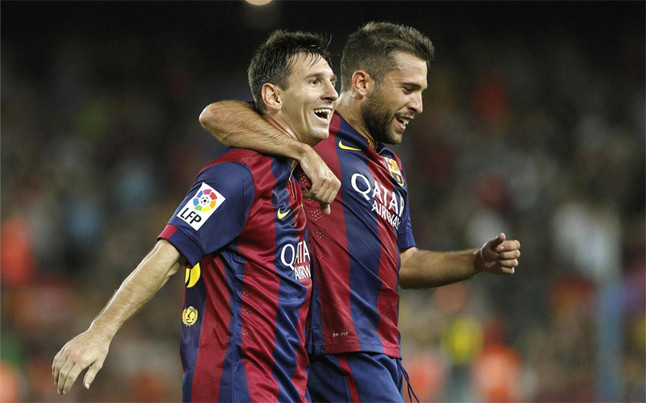 Goals from Jordi Alba and Neymar in extra-time helped Barcelona claim victory in the Copa Del Rey final against Sevilla.

Luis Enrique’s side completed the league and cup double for the 7th time in the club’s history.

The first-half produced very few chances with both teams trying to establish themselves in the match. Barcelona’s most obvious chance fell to Luis Suarez when Andres Iniesta scooped the ball over the Sevilla defence to the Uryguian only for the striker to fire well wide.

Sevilla’s first chance fell to Coke after a well-worked passage of play on the right, however, the midfielder completely miscued his effort, slicing his shot away from goal.

In the 36th minute, Javier Mascherano was sent off of for the Catalan giants after he dragged down Kevin Gamiero on the edge of the box as the Sevilla frontman was running through on goal.

Into the second-half, and it is Sevilla who went closest in the opening stages. They moved the ball around well on the edge of the box before Ever Banega unleashed a shot, which deflected off Gerard Pique, off the post and away.

Then in the 57th minute, Barcelona suffered a second loss of the game this time Suarez was forced to depart after injuring his hamstring.

The pressure continued to build for Barcelona, a series of blocks and heroic last-ditch tackles from Pique and Sergio Busquets just about kept the league winners in the match.

However, the tide turned in Barcelona’s favour when Banega was sent off in added time for hacking Neymar who was closing in on goal.

Both teams finished the 90 minutes on with 10 men, with extra-time and penalties looming.

Seven minutes into extra-time Barcelona found the breakthrough. A sublime pass from Lionel Messi picked out Jordi Alba who had made the run down the left side. The full-back was able to angle his left-footed shot past Sergio Rico and into the far corner of the net.

On the verge of half-time, Barcelona nearly doubled their lead when Pique met Neymar’s free-kick with a header but Rico was equal to the Catalan’s effort with a smart reaction save.

With both teams down to 10 men, Barcelona were able to regain control of the match, slipping back into their possession-based game and wearing out the Sevilla players, who had played in the Europa League final against Liverpool just four days earlier.

The cracks began to show for Sevilla when Daniel Carrico was sent off for a second yellow card for a foul on Messi.

Neymar added the finishing touch for Barcelona, making it 2-0 after Messi again provided a pinpoint pass to the Brazilian who directed the ball into the bottom corner.